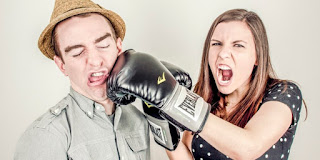 The reason why marriage was instituted will be forfeited if there is no peace and harmony in your marriage. That is why you and your partner must see to it during your courtship that when you get married a peaceful home is not negotiable. It is the joy of every man and woman to have a peaceful and harmonious home.

Moreover, there must also be some level of freedom during courtship or in a marriage. When either the man or the woman feels he or she is being enslaved, then it means freedom is no longer in view in such marriage. For example, if there is nothing you do without being criticized or you don’t feel at home in your marriage then enslavement has crept into your marriage. There is a feeling every married couple should have in a marriage which is this is my own - a sense of right. When such feeling is gone, you become a stranger and a slave in a place you should have seen as your own.

The ideal order has it that the husband should provide the Leadership of the home (not being domineering) and also love his wife while the wife should submit to the leadership of her husband. It is abnormal and out of order if either the man or woman domineer his or her spouse. If such happens your marriage has violated the natural cause where everything must be mutual: decision making must be mutual, respect must be mutual, mutual understanding etc.

Read:  7 qualities of a good wife every man wants

As a man or woman, there are signs you need to look out for before or during courtship for you to be sure that your partner isn’t domineering. The signs are listed below:

When your partner can’t accommodate a situation where you both make concessions suggests that he/she will be domineering. A person that doesn’t want to compromise will always want to have his/her way at all cost. Compromising does not imply weakness rather it shows you are strong and mature.

2.  He/she has ‘I am always right mentality’

When he sees himself as being right always, it suggests that he won’t bend even when his opinions are wrong. People with this mindset believe they can never be wrong, so they find it convenient to dictate to their partner.

3.  He/she doesn’t believe in freedom and dictates a lot

This is common in men cycle than women. Some men believe that women are a second class citizen that can be treated unfairly. So you have to check his/her concept on freedom before you agree to marry him/her. I am not saying freedom to be unruly or to do what is wrong but at least a woman should have a sense of belonging, freedom of expression (airing her view or opinion) etc.

A proud man or woman is likely to be rude and eventually have a domineering mindset. Therefore, if he/she is proud and rude it means he/she has the tendency to domineer.

5.  He/she is not teachable

One of the heart cries of every man or woman is that he/she has a partner that is teachable. Life is a school and we learn daily, it is through this we unlearn the wrong ideas and learn the right ideas. But when your partner fails to be teachable and sees himself/herself right at all times then you are in for a great deal.

6.  He/she is not submissive

It is always difficult for this type of people to bend: they are just rigid. To obey instruction is not their way rather they want to be the one in charge (always giving commands).

When he/she is skillful in influencing or controlling you to his/her own advantage.

8.  He/she always enforce his or her opinion on you and quarrel easily when presented with a contrary opinion.

9.  One of his/her parents is domineering

If a man has a domineering father he may likely have such tendency and the same goes to a woman. Therefore, you have to check his/her parents for this attitude.