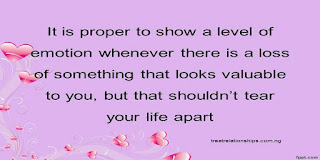 I recently heard a story of a lady and I know that this story will help in shedding light on some of the points I am about to make. The story wasn’t from the source but from a third party, although, I don’t always subscribe to third party story because of its inaccuracy and its tendency to mislead. However, there are certain things I was able to deduce from the narration that will be of help to you.

I was told that the young girl was in a relationship with somebody whose name was withheld. Presumably, the relationship was going on well before it experiences some threat some couple of weeks ago. On that very day, the lady’s friend discovered that she was weeping and sobbing inconsolably. Her friends asked her the reason for the sudden emotional response, she responded saying “my fiancé wrongly accused me”. According to the story, she made several calls to him, his family, her family, and other relevant people to appeal or tell her side of the story. Moreover, since the incident, she hasn’t stopped weeping and she is emotionally imbalanced.

People around her said the reason she sobs inconsolably is that the guy means the whole world to her and she can’t imagine how her world will be without him. They also remarked that the guy used that accusation as a way to leave the relationship since the girl wasn’t at fault or hasn’t done anything wrong.

It is proper to show a level of emotion whenever there is a loss of something that looks valuable to you, but that shouldn’t tear your life apart. You should know how to shake off and move on with life.

I know that before a lady can go into a relationship there are certain things she sees that attracted him to her. It might be his fame, money, kindness, values, skills, physique etc. but that is not a good reason to conclude that there can never be a better man. Such a statement is myopic. Although, people aren’t the same in all aspect, it is a lack of deep thought to think you can’t be in a relationship with someone resourceful and better than your present partner.

Most importantly, knowing who you are will save you from unreasonable assertion. Being aware of your values, what you can achieve, and what you can offer won’t allow you to be at the mercy of any man. Let me digress a little, a man has a way of knowing that a girl loves him or stays with him because of his status, fame, and money. I believe having fame, making money, and having a high status are what a lady can also achieve without relying on a man. You should not put your life in bondage because of your lack of exposure and myopic view.

This reminds me of a story of a man that said, he is the only good person left on the surface of the earth and he wanted to die because he can no longer condone with the mischievous acts of men. When the Supreme Being had this statement, He told the man, I have thousands of men that are better than you, stronger, and capable of doing righteously and valiantly on the surface of the earth.

Men love women that have confidence in their ability to achieve great things but take for granted and have no regard for those that rely too much on men to gain social status.