A wise woman builds her home 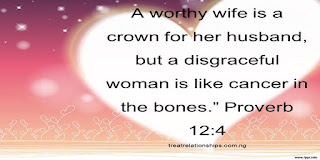 “A worthy wife is a crown for her husband, but a disgraceful woman is like cancer in the bones.” Proverb 12:4

It is a general knowledge that it is easier to destroy than to build because building takes time while to destroy only takes a few seconds or minutes.

There are some steps that are involved when building which includes architectural design, checking the landscape and topography, laying of foundation (it depends on the building to be erected), putting in your resources etc. In addition, buildings differ from each other, how beautiful your building depends largely on your resources.

In the same manner, marriage can also be likened to a building. How glamorous your marriage would depend on the level of wisdom of the homemaker. Women are a homemaker. They have the ability to design and build a successful marriage. This is not an attempt to flatter women but by experience, I have been informed of their ability to build a successful home. I have seen women that have single-handedly make their marriage work despite the ruthless attitude of the men. There is a story I will like to share on this note:

There is a family whose head (husband) is irresponsible and always drink to stupor. He doesn’t care about anything at home to the extent that he has no plan to own a house. The woman was patient with him in all those years but kept encouraging him and made him know that there is a need for them to own a house. The man heeds not to the advice of his wife but prefers to lavish and spend his money extravagantly outside. The woman by wisdom started building a house for the family. And after the house has gotten to a completion stage, she took the man to the site and showed him the building. During this time, things are not going well with the man financially. The man was amazed and wept because he taught he had made fool of himself over the years. In spite of his financial woes, he decided to put in resources to make sure the house was completed.

The day I was shown the house I marveled at the beautiful structure erected. The woman and his husband are now happy again in their marriage because of the woman's patience and wisdom to make the home what it is today.

There are few things I will like to highlight about a wise homemaker:

1.   She is not a quarrelsome wife

It is said that a quarrelsome wife is as a constant dripping.
The easiest way for a woman to destroy her marriage is to be quarrelsome and the best way to make your marriage a heaven on earth is to be an understanding wife. You will have little or no problem when you are able to understand yourself and understand your husband.
It is written in the book of proverb that “it is better to live alone in the desert than with a quarrelsome, complaining wife”

Worry weighs a person down: an encouraging word cheers a person up. Instead of trying to suck the life out of your partner through complaining always encourage him.

An encouraging word is a medicine to the soul; it cheers and lifts the heart up.

3.   She has a good sense of judgment and discretion

A beautiful woman who lacks discretion is like a gold ring in a pig’s snout…proverb 11:22 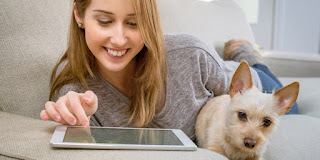 A Woman needs to take note of things that guys find unattractive but won't tell you. Some ladies do wonder why they are unfortunate to attract the right men. But they fail to understand that they embraced things that easily irritate men, thereby, sending right suitors away. If you take the time to study ladies that attract their dream men, you will notice that they have goodly attributes that attract their dream men.  I have come to realize that if what you desire in life doesn’t come to you, it means there is something wrong about you. And you won’t get a good result if you fail to look into it. Read: 7 qualities of a good wife every man wants The most common order is that guys are the one to look out for ladies and propose to them. So it means, out of the ladies that surround a man, he will have to pick one that befits him. And the luckiest girl is the one that has what the man needs in a woman. Someone once told me that ‘ preparation precedes v