My boyfriend abuses me a lot, but why am I still attached to him? 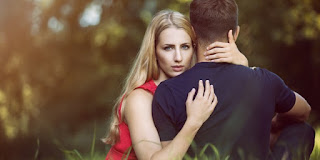 Most times, the thought of “I have a lot to lose” comes because sex has been involved in the relationship. Ladies wouldn’t mind walking out of an unhealthy relationship if sex isn’t involved. Sex does have an effect on women than men in a relationship. It is what is responsible for the attachment despite the abuse in such a relationship.

For a long time, I have been thinking about what might be the cause of the attachment. Fortunately, I stumbled on an article that gave a clue to what might be the reason why ladies get attached to a man after having sex with him. The article shed some light on oxytocin which is described as ‘love hormone”. This hormone is believed to be involved in a wide variety of physiological and pathological functions such as sexual activity, social bonding etc.

Before I continue my findings on oxytocin, it is important to note that men and women view sex and relationship differently. Guys don’t necessarily see sex as a measure of the depth of the relationship like most women do, for guys sex is more of a reward for being in the relationship. A man wanting to sleep with you is not a measure of his actual feelings for you. For women, they want commitment and view sex as a depth of the relationship. Women have control when it comes to sex and can decide whether to give in or not. Therefore they are liable to get attached once they have given in to sex.

The deeper attachment ladies get in after having sex is because of the oxytocin that is involved during sex activity. According to Navneet Magon and Sanjay Kalra, oxytocin modulates a full range of physiological functions and emotions: happiness, attraction, love, affection, and hatred after stress. These are all governed directly or indirectly, at least in part, by oxytocin. They were able to establish that this hormone can increase the lust for love. Earlier, Oxytocin has been best known for its roles in female reproduction. It is released in large amounts during labor and after stimulation of the nipples. It is a facilitator for childbirth and breastfeeding. This hormone has a greater effect on women than men.

The role of oxytocin has established a fact that sex should only be meant for married couples and not for partners in a causal relationship. So abstinence from sex can assist you not to get unnecessarily attached to a relationship. Someone asked, “What are am I supposed to be doing while making him wait before establishing a real connection?” I have explained in one of my articles that, a marital relationship should be meant for people that are ready for marriage.  A relationship in this context must not be more than two years before you get married to your partner. The length of a relationship may increase the urge to have sex. During this period, you can both engage in self-development activities and use the period to get to know each other better.

Women would worry less if only they had sex with the men they married.