My daughter! He is not buoyant financially, you can’t marry him. 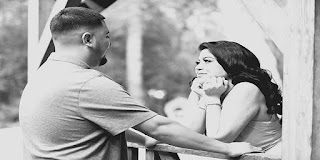 I have come to realize that money is important in marriage. Lack of it might put pressure on the healthiness of a marriage. I know what it means to have and not to have in a marriage. Sometimes, I try to imagine myself as the wife so as to understand how women feel when the man isn’t financially buoyant. To be financially buoyant means you have the financial capability to meet your needs and take full responsibility of your family. The opposite is to be financially handicap or incapacitated.
What I see is a situation that isn’t palatable not only for the woman but the man. The financial constraint can lead to a broken home. Regardless of the importance of money, there is a kind of disdain for women that make money a priority in marriage. For this reason, a lot of women try to hide their feelings about the financial aspect of the marriage. They save their face from being stigmatized. But they wish their husband is capable financially.

Something happened not too long ago in a place I happened to be. There is this guy who jokingly said to his head of unit who happen to be a woman that “I want to marry your daughter”. I have an attitude of reading peoples’ emotion, gesture and countenance during a conversation. The woman reacted negatively at the joke and she said: “I suffered a lot on my daughter, so I can’t allow her to marry you”. Of the truth, the woman labor so much on her daughter. All of her children schooled abroad. It is not as if the guy wasn’t okay but the woman believes the guy’s financial status doesn’t fit her taste for her daughter. She has an expectation that must come to pass.

After the scene, I engaged in a deep thought on what happened between the woman and the guy. Although, the guy was joking but the woman’s response reveals her expectation about the kind of a husband she wants for her daughter. I think parents want their children to live a better life than what they have lived. Moreover, they want them to start their marriage on a good note.

Can we say that the financial status of a man is the first thing to look out for?

Dear mother, before you stop your daughter from getting married to that ‘poor ‘man. Try to examine whether the man has a potential of making wealth. Some guys are potential rich men but you just need to give them time for the riches to materialize. It may be that he is at a stage of self-development: a time whereby he is making himself resourceful. If the guy is at that stage, please don’t be a stumbling block on your daughter’s way.

My dear daughter, look not at the present status of a man, rather look at what he is capable of achieving in the future.

Note: A lazy man doesn’t deserve a wife because he can’t be responsible. An irresponsible man isn’t worth calling a father.